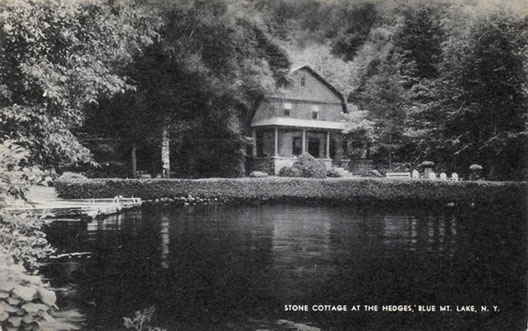 If you are interested in the history of the Adirondacks and The Hedges did you know that the Adirondack Experience has an extensive history collection that can be viewed online? Search the online collection using keywords that interest you. This furniture piece can be viewed online and you can imagine it at The Hedges when it first opened in 1921, according to Helen Collins.

Visitors to the museum exhibitions, property and programs are exposed to art and nature as well as modern and historical Adirondack life. 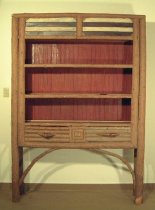 Pat Benton showed her love of the “old girl” as she calls The Hedges in numerous ways including having The Hedges added to the National Register of Historic Places in 2009. In 2018, the AARCH (Adirondack Architectural Heritage) recognized her for her long-term stewardship of The Hedges. 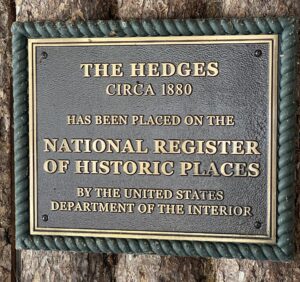 Throughout 100 years of providing lodging and dining for guests at The Hedges, all four owners have have been recognized for the quality of food. One former guest sent us this recipe that the VanYperens shared when she complimented the homemade cookies for which they were known. Joan Olson also share some others she and her mother made. Please send any recipes you may have from Collinses, VanYperens, and Pat Benton with Sue Anderson to thehedgesonbml@gmail.com

Cream shortening, sugar, egg, and molasses. Mix dry ingredients, add to creamed mixture. Blend and chill. Roll into balls and roll in sugar. Place on greased sheet and bake at 350 -375 for 8-10 minutes. 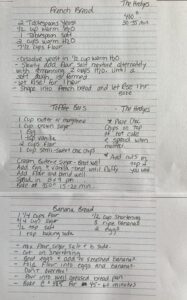 The Collins family that originally opened The Hedges had great impact on the Blue Mountain Lake community and beyond. It’s a large family so their impacts are numerous and varied.

One member was a reference for this recently published book. The late John Collins Jr’s life growing up in the hamlet and at The Hedges, and how his upbringing influenced how he valued education, is included. There’s also stories about Eagle’s Nest and its owners and guests in the book about the creation of the Adirondack Park Agency (APA).

A Wild Idea shares the complete story of the difficult birth of the Adirondack Park Agency (APA). The Adirondack region of New York’s rural North Country forms the nation’s largest State Park, with a territory as large as Vermont. Planning experts view the APA as a triumph of sustainability that balances human activity with the preservation of wild ecosystems. The truth isn’t as pretty. The story of the APA, told here for the first time, is a complex, troubled tale of political dueling and communities pushed to the brink of violence. 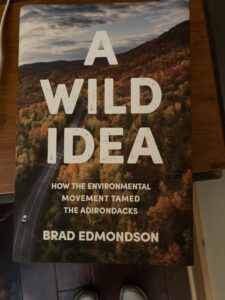 The “Centennial Season” section of this website includes a brief history of the property and the rustic resort and links to Postcards and Photos as well as to this 17 minute film taken in 1928.

On Sunday, August 1, the New York State Historic Marker was dedicated at a gathering of 80 representatives of former and current owners, current guests, community members and elected officials. Due to inclement weather, the remarks were moved to the Pavilion where the reception was already planned. Visit the dedication page for more images and information!

A Boathouse was located where the Swimming Dock is now. Do you recognize its sign in its new location? 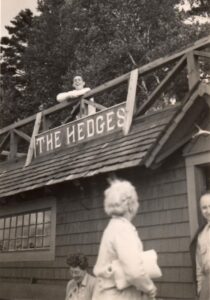 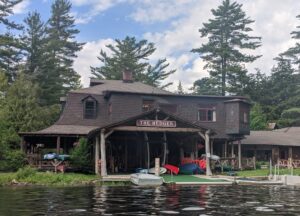 Each guest during the 2021 season receives a laminated Centennial placemat of their own. It features a brief history of The Hedges and a selection of historic photos. 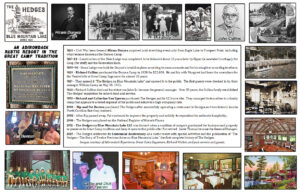 The family of Dick and Cathy VanYperen, the second owners of The Hedges (1973-2000), have shared many photos including ones with their children, grandchildren, and beloved staff members. They managed its transition to a family-friendly “camp” that appealed to a broad segment of the public and achieved a high occupancy rate. In 1980, The Hedges was described in national media as one of the best family-oriented resorts. Roger Kessel interviewed members of the family for “The Hedges: The Story of Twelve Precious Acres on Blue Mountain Lake” and highlighted that Dick and Cathy “were not ones to confuse living with making a living”. 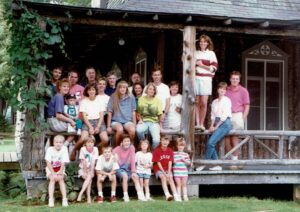 The new owners (The Hedges on Blue Mountain Lake LLC) honored previous owner Pat Benton in 2018 by renaming the dining room. “This is a moment in which we honor Rip and Pat Benton for what they have given … hundreds of present, past, and future Hedges campers. The Bentons recognized in The Hedges what those of us who love historic buildings call “good bones. During the Benton Era, The Hedges was revitalized as a premiere Adirondack resort. Buildings, facilities, meals, and amenities were brought up to date, and the glory days of the famous Great Camps could again be experienced here on Blue Mountain Lake by a discerning 21st-century clientele.” 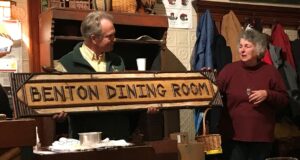 “JRC” cabin recognizes John R. Collins, Sr. who ran The Hedges after his father Richard’s death in 1943. Dick and Cathy Van Yperen kept the name in recognition of his support of their work when they purchased the business and property in 1973. 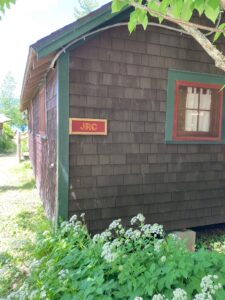 “The Hedges: The Story of Twelve Precious Acres on Blue Mountain Lake” book by Roger Kessel is now available for purchase at the Crow’s Nest gift shop, in nearby locations, and through Amazon. Reading it is a great way to learn about the property, the business, the people, and the experiences that are indeed “precious”! 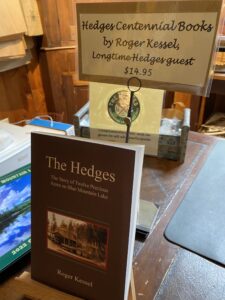 Would this early marketing brochure attract guests today as it did in the 1920s? A paper copy of it will be on display at The Hedges this season.

Since Route 28 would not be constructed for another ten years, The Hedges in 1921 was accessible by watercraft, and by land, by what is now Hedges Road. This was the main thoroughfare for westbound vehicular traffic, passing by the entrance to The Hedges and continuing along the south shores of Eagle and Utowanna Lakes to Raquette Lake.

Taking a right turn before passing Eagle Lake and crossing two bridges over the channel between Blue Mountain Lake and Eagle Lake, provided access to Eagle’s Nest Golf Course on the northerly shore of Eagle Lake. The two bridges were a lift bridge that allowed steamboats to pass between the two lakes, and the Pioneer Bridge, a fixed bridge that had been constructed in 1891 in memory of Dr. Thomas Clark Durant. 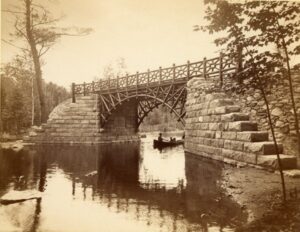 “The Hedges, appropriately named on account of the wonderful cedar hedges around it, is a new summer place not heretofore heard about, at least under this name,” according to an early brochure from the early 1920s. 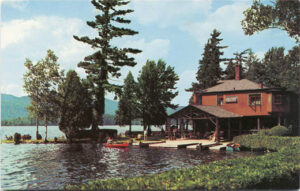 Flashback Fridays started with this page from the 1921 guest register! William Carey, Margaret Collins’ nephew, was the on-site manager for the first guests since Richard and she were committed to their roles at Great Camp Sagamore until 1924.

If you’re interested in learning more about the owners and managers during the past 100 years, you’ll love Roger Kessel’s book!