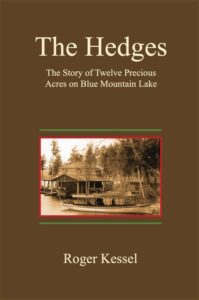 Like the smooth entry of an Adirondack guideboat, The Hedges transports the reader to the golden years of Blue Mountain Lake when a Civil War hero and extraordinary businessman built a private camp on its shore. This book traces the camp’s fascinating history and its conversion from private use by a socially elite family to a rustic resort open to the public.

The remarkable story of the first innkeepers, the former caretakers of Great Camp Sagamore, is followed by those of subsequent owners facing their own unique challenges. In recounting their experiences and our changing perspectives on the Adirondack wilderness, the author unlocks the secret of why generations of guests have so deeply treasured The Hedges.

Roger Kessel’s introduction to the Adirondacks was as a youngster in the Fulton Chain of Lakes where a Native American Algonquin befriended Roger and his brother, taking the two city boys fishing in Raquette Lake and remote brook trout streams. Those “adventures” and decades later experiences such as slipping through the waters of Little Moose Lake in a 1903 Dwight Grant guide boat are etched in his memory. To this day, even in his advanced years, the lakes for fishing and the snows of winter for cross country skiing relentlessly pull him back to the land of lakes and mountains. Roger‘s book about The Hedges is a tribute to its owners and indirectly a thank you to all the other innkeepers who made his exposure to the Adirondacks possible.

Roger is a member of a group of about 60 families and individuals who purchased The Hedges in 2018 for the purpose of keeping it open to the public and preventing a reversion back to private use. For most of his career he practiced law in Rochester, N.Y. His poetry has been published in literary journals and other periodicals. Roger received a B.A. degree from Columbia College and, after serving as an officer in the U. S. Navy, a J.D. degree from Harvard Law School.